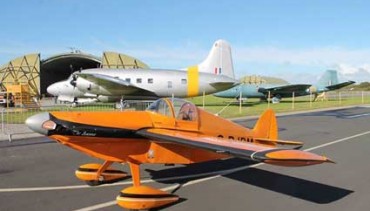 When the Newquay Airport end of Coventry-based Classic Air Force announced it was closing earlier this year, enthusiasts, engineers and pilots who contributed to the venture were left with a huge void. Someone suggested, “Why don’t we start a new place ourselves? and that was it, the idea of the Cornwall Aviation Heritage Centre (CAHC) was born.

The Heritage Centre opened to the public for the first time last Sunday, 20 September.

“It’s not Duxford or Fantasy of Flight,” said CAHC. “But it is a testimony to the determination of a small group of people here in Newquay that wanted to keep this going.

“We are now outdoors as well as indoors. We are concentrating on restoration projects. And we are working on creating an education and learning environment and including local schools.”

The Cornwall Aviation Heritage Centre is set among the massive former RAF Hardened Aircraft Shelter (HAS) buildings at Newquay. They were originally designated as a forward operating base for the Buccaneer Maritime Strike force and later used by Typhoons, Jaguars, F16s and finally, in 2008, Harriers and Tornados.

Among the iconic British aircraft on display are two Hawker Hunters, a Hawker Siddeley Harrier Jump Jet, a BAC 1-11, Vickers VC-10 and a Vickers Varsity.