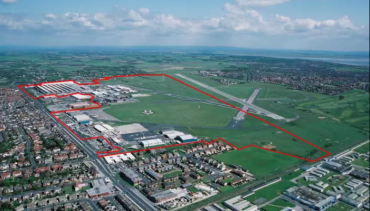 Blackpool Council has bought the airport for £4.25m in a shock move to secure the future of aviation at the Squires Gate site. The announcement comes after weeks of speculation over who was likely to take the airport off the hands of owners Balfour Beatty.
The move brings the airport back into full public ownership for the first time in 13 years since the council sold it to a consortium led by City Hopper Airports and Mar for £13m.  The council has acquired all shares in the current operating company Regional and City Airports (Blackpool) Holdings Ltd and from today will take over 100 per cent ownership of the airport site. The council said it was open to other investors with aviation expertise to come in on the project and said the purchase would be funded by prudential borrowing and future sales of identified land within the enterprise zone to new businesses.

It added that a full business case exploring the potential future for the airport was being developed in the strategic masterplan for the enterprise zone. Coun Simon Blackburn, leader of Blackpool Council, said: “Today is a really important day for aviation on the Fylde coast and this sale heralds a positive new dawn for Blackpool Airport.

“This move will protect the airport as a company, including the 30 jobs that are currently employed there. “It will also allow us to ensure that the airport itself can continue to operate as an important hub that can benefit the whole region.
“Blackpool Airport is such a key part of having a strong local economy and it is absolutely vital that we safeguard its future and ensure that it can continue to be used as an aviation and employment hub for the Fylde coast for the long term.” Balfour had originally put the airport up for sale in August 2014, before its closure in October 2014 due to massive losses.

It said losses ran at over £1m a year, totalling almost £35m at the end, and it blamed the contract it had with commercial airline Jet2 and falling passenger numbers. Jet2 in turn blamed Balfour Beatty for not promoting flights enough to attract more customers. Balfour again put the airport on the market in October 2016 after its reduced capacity operation stabilised the business centred on small scale aviation, private jets and the strong offshore helicopter business. In recent months, two interested parties were believed to have put in serious bids for the airport and its land. One was London-based property developer Midos but many people in the resort were concerned that the aviation side may have been neglected by owners with more interest in development of the land at the site.

Midos had an exclusivity agreement with Balfour Beatty as they carried out due diligence on the airport to make sure the deal was a good one, but that is said to have run out earlier this month and the council, which already held a five per cent share of the airport company, jumped in to offer a deal to Balfour Beatty. Earlier this month, Blackpool Council, bought two key parcels of land at the airport for £600,000. They were the last two areas at Squires Gate held by the airport’s previous owner Mar Properties which sold the airport to Balfour Beatty in 2008. At the time the council stated it “would assist the council in influencing the future sustainable operation of Blackpool Airport” as part of the enterprise zone centred there.It was a clear signal that concerns were circulating in Blackpool that if the right owner for the airport was not found then it’s aviation heritage may decline and pressure would grow for the huge area of land to be simply turned over for development including housing.

On August 14, leader of the Conservative Group on Blackpool Council, Coun Tony Williams, called on the council to step in and buy the airport to secure its future and the continuation of aviation at the site. Today he said of the council’s move to take back ownership: “I am delighted that the airport isn’t going to fall into the hands of a property developer, or a company more interested in the value of the land than aviation, but why has it taken this council so long to listen to what everyone has been asking them to do? If they had acted sooner then perhaps we would still have passenger flights operating from Blackpool Airport but they sat on their hands while Balfour Beatty sold off all the scanners and other equipment and allowed the terminal to be demolished. “This council still has a lot to do to prove to Blackpool people that they will invest in the development of air services and they have not just paid a knock down price to sell it on.” Blackpool South MP Gordon Marsden said: “The council is making a very important and strategic decision which should be welcomed. “I have long felt that we need to secure the future of the airport as an aviation centre and that cannot be achieved if it passes into the hands of people who would simply be focused on housing or retail development.” But he said that future commercial passenger flights would depend on air operators and people should not expect a swift return to holiday flights since the area’s lack of capacity to fill large jets had caused big losses in the past. He said: “The strategic fit which the council is saying is the key factor is absolutely right. The Enterprise Zone and the existing activities at the airport offer significant potential for development in the future given the commercial activities in Liverpool Bay with energy and other renewables. “It absolutely has to be carefully maintained financially but the idea that it should be a central part of economic strategy locally is completely correct.” He added that commercial flights could return if the Government would consider subsidies for regional airports to help with security and safety overheads.

Fylde MP Mark Menzies said: “It is vital we retain and grow an airport business on that site to ensure the Fylde coast has a strong economy. “I’m delighted we will see the jobs on the site retained, and hope we can even increase the amount of business the airport does over time.” No plans for a return of big commercial jet airliners Blackpool Airport once flew half a million people from Squires Gate and welcomed big operators such as Monarch and Jet2. However, passenger numbers fell to under 300,000 after the recession which led to the losses. The owners faced criticism for failing to promote the flights enough and for the introduction of the controversial Airport Development Fund – a £10 flat fee for anyone over 16 using the airport. When Jet2 quit the airport before its closure in 2014, a campaign group, Save Blackpool Airport, was founded to lobby for the return of holiday flights. But the International Terminal was demolished and its security scanner facilities auctioned off in 2016, which caused protests and which makes it difficult for commercial flights to return.

Today council leader Simon Blackburn warned that holiday flights were not a priority. He said: “We do not envisage the return of large scale passenger planes to the airport. “The purpose of this acquisition is to safeguard the helicopter and other commercial airside activities that take place, build upon them and deliver our overall objective of creating up to 5,000 jobs on the Enterprise Zone site. “Blackpool Airport is the largest area of land in our thriving Enterprise Zone and this purchase will help us ensure that the airport continues to play a big part in making our Enterprise Zone one of the most successful in the country. “As the current company stands, Blackpool Airport is profitable and as such we can be confident that the money for the purchase can be repaid. “As a minority stakeholder, we have always retained an interest in the company continuing as an airport and serving the whole of the Fylde coast. “Now as the sole owner, Blackpool residents can feel confident that we have the airport’s best interest at heart and will aim to support and grow the airport where possible. “People can be confident that we have the airport’s best interests at heart, we will retain the current operating staff as well as exploring any potential opportunities for private companies with aviation interests to invest in the company so that it can grow in the future but this is not about trying to bring jumbo jets back to the airport anytime soon.”