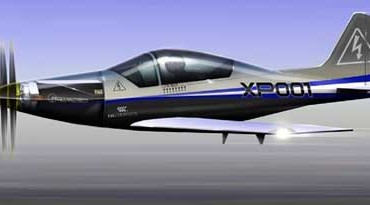 “The CEP development is a bolt-on self-contained twin-engine contra-rotating fixed pitch 300hp system for existing piston engine light aircraft,” Nick told FLYER. The Furio, made by New Zealand company Falcomposite, is designed to take piston engines up to 300bhp. It’s based on a design by legendary Italian engineer Stello Frati.

“The Furio is a carbon fibre monocoque airframe light enough to allow 400kg of battery to be added. We should get an endurance of about 1 hour. It’s a fantastic little aircraft but not at present certified for Europe. We plan to start ground testing the prototype this December and flight test in a Furio, in the third quarter of next year.”

The prototype Contra Electric Propulsion System (CRPS) will be manufactured by Potenza Ltd, a Coventry-based company which is a leader in electric and hybrid power units. Potenza will also provide a test rig, battery pack, ancillaries and instrumentation to undertake ground tests, with delivery due in December.

The contra-rotating props will be suppled by Hercules Propellers which has already manufactured similar items for the Bugatti 100P project.

Many benefits of CRPS have been identified by Nick Sills, who intends to make it available as a production power unit which can easily replace a piston engine. They include:

* Twin motors, therefore the aircraft is reclassified as a ‘twin’ with safety and airspace benefits. However, as the two motors are inline, there are no asymmetrical flight characteristics on engine failure
* Two fixed pitch propellers – very simple, cheap to buy, robust and maintenance free
* Electric propulsion is extremely simple (only two moving parts compared to piston engine with 400-500 moving parts)
* Hugely improved performance. No propeller torque, better acceleration, higher speed, reversible thrust, huge range of power settings (a contra rotating fixed pitch propeller pair is more efficient than a single variable pitch propeller with the same horsepower)
* 30% smaller overall propeller diameter giving better ground clearance and shorter undercarriage
* Silent operation and no exhaust
* Very low maintenance costs (almost no maintenance, 10,000hrs between engine overhauls)
* Cheap to run. An electric recharge is about 7% of the cost of piston engine fuel and oil and other consumables, mile for mile
* The small size of the propulsion system has a huge effect on the shape/profile of the aircraft nose improving the aerodynamics.