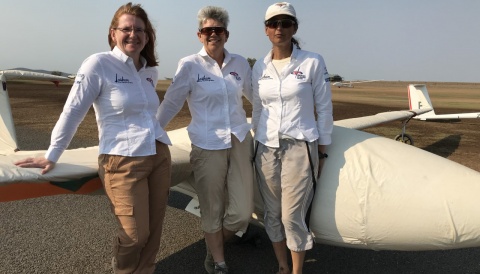 BRITAIN’S top-flight glider pilots are taking on the best in the world at the Women’s World Gliding Championships in Australia.

Oxford’s Claudia Hill and teammates Liz Sparrow and Ayala Truelove from Hampshire are familiarising themselves with the conditions and terrain of Lake Keepit in New South Wales before the competition starts on 4th January 2020.

Liz Sparrow, 57, from Romsey in Hampshire has been the highest ranked woman in world gliding and is the most experienced member of the team having competed in seven international championships.

Claudia is confident the team will perform to the highest level.  She said: “The British Gliding Team has had an amazing year with incredible results, with Jake Brattle and Finn Sleigh taking gold and silver in the Junior World Gliding Championships for Team GB in August.  We want to continue that success and inspire more people of all ages to get involved in gliding.”

Meanwhile Ayala Truelove, 53, from Tadley in Hampshire has won silver twice in the women’s world championships and won the UK mixed national championship in 2015 where there were only two women competing out of 50.

Ayala is no stranger to sporting competition, having won the FA Women’s Premier League Cup with Wembley Ladies in the 1996 and 12 international caps as a professional footballer.  She added: “I want to show young women they can achieve anything they set their minds to, even if others think they can’t. The sky truly is the limit.”

Liz added:  “I’m really looking forward to achieving some high speeds in what should be excellent gliding conditions competing against some seriously good pilots. Flying over the outback will be interesting and we’ll have to avoid the kangaroos when landing – something we don’t have to worry about back home!”

The Department for Transport has recently appointed Claudia, Liz and Ayala as its ‘General Aviation Ambassadors’ as part of the Government’s Reach for the Sky initiative which aims to raise the profile of aviation and encourage people into aviation, including through participation in GA activity.

The WWGC features 51 pilots from ten countries and takes place over 14 days.  Points are awarded daily to the fastest pilots around each day’s given cross country task, typically between 150 kilometres to 500 kilometres long, taking approximately 3-6 hours to complete and at top speeds of around150 kph.

The overall winner and new world champion will be the pilot with the most points scored during the competition period.

The next women’s world gliding championships will be held in the UK in Leicestershire in 2021.