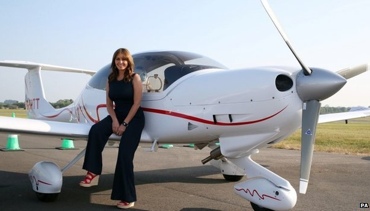 The broadcaster Carol Vorderman has come one step closer to her dream of flying solo around the world after gaining her pilot’s licence. She took the two-and-a-half hour exam in a single engine Piper plane at Gloucestershire Airport.

Next year she will attempt to fly solo around the world, a 29,000 mile journey following in the footsteps of aviator Amelia Earhart’s doomed 1936 mission. In August the 52-year-old made her first solo flight live on television. Then the presenter completed a five-minute flight taking off and returning to Gloucestershire Airport.

Ms Vorderman, who lives near Bristol, will collect her private pilot’s licence (PPL) next week and she can then officially fly with passengers. “It’s been a long, long dream. It must be nearly 40 years now – I’ve always wanted to do it,” she said.

The former Countdown star is bidding to become the fastest ever person to progress from first solo flight to global solo flight, in about 18 months. Her round-the-world flight will include stops in Cuba, Mexico, Sudan, Malaysia and Pakistan.

Amelia Earhart disappeared while flying over the Pacific in 1937.

Accreditation to BBC for Photo and Text :  http://www.bbc.co.uk/news/uk-england-gloucestershire-25224700