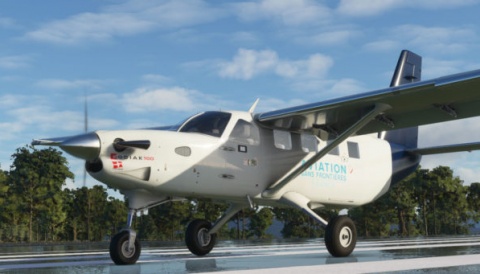 The Kodiak 100 since-engine turboprop has been added to Microsoft Flight Simulator, with the aircraft’s Tarbes, France-based manufacturer Daher saying it has received “high praise from users for its authentic flight characteristics.” This includes ‘flying’ this rugged aircraft in scenarios that include humanitarian missions to unprepared strips, reaching back-country destinations and serving high-altitude mountain airports.

One of the variants symbolises the operations of France’s humanitarian organisation, Aviation Sans Frontières (Aviation without Borders), which is to receive funding based on the add-ons sold via the following sites: simworksstudios.com, orbxdirect.com, SimMarket.com, Flightsim.com and getcontrail.com.

This funding comes from money received by Daher through sales of the Kodiak 100 simulator application, which Daher then provides to Fondaher – the endowment fund initiated by the Daher family and supported by the company and its employees as part of the corporate social responsibility (CSR) policy.

“Our thanks go to Daher and the company’s Fondaher endowment fund in helping make this a reality,” explained Gérard Feldzer, President of Aviation Sans Frontières. “With the Kodiak 100 in our colours, it will be possible for a wide audience to experience humanitarian aviation while operating from challenging African locations, performing rough field landings, airlifting essential equipment and delivering medical personnel to remote sites.”

Richard Daher, the Fondaher endowment fund’s president, noted that the Kodiak 100 simulator is a highly visible aspect of the partnership between Fondaher, Daher, and Aviation Sans Frontières – which also includes “Les Ailes de l’Avenir” (Wings of the Future), a workshop programme that provides vocational training for young people in difficulty, leading to the construction of a microlight aircraft.

With its introduction on the Microsoft Flight Simulator, the Kodiak 100 joins Daher’s TBM 930 very fast turboprop aircraft – which entered the virtual world with the simulator program’s release in August 2020, becoming a popular choice among the gaming community.

“As in real life, our Kodiak and TBM aircraft family has developed a following of dedicated users in the world of flight simulation,” concluded Nicolas Chabbert, Senior Vice President of Daher’s Aircraft Division. “We are pleased to be sharing the excitement of flying with an ever-wider number of aviation enthusiasts.”