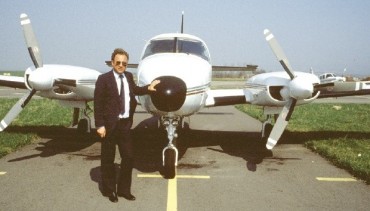 Looking back at the development and success of Piper Germany

Piper Germany has celebrated some key milestones this year:

How it all began:

Wilfried Otto had his first trial flight at the age of 25. Eight days later he purchased his own personal airplane and 6 months later he had his Private Pilots Licence. The Commercial Pilots Licence, Instrument Rating and Flight Instructor qualification followed shortly thereafter. Since then he has been driven by his passion for flying, having flown more than 7000 flight hours in command.

“Today I have probably been longer in the General Aviation industry than anyone else” says Wilfried Otto.

To finance his hobby Wilfried established an aircraft charter company, Lahnflug Wilfried Otto. In 1970 his company was appointed as a Piper Dealer by Henschel Flugzeugwerke in Kassel who were the authorised Piper Distributor since 1968. Based on the success of Lahnflug, Henschel Flugzeugwerke appointed Wilfried Otto Managing Director of the business division “Piper Aircraft” in 1975.

Wilfried Otto had a clear vision of the Piper Distributorship of the future. Under his management the aircraft parts operations were significantly expanded. And the following years were the best in General Aviation.

In the late 1970’s Piper Germany sold approximately 150 Piper aircraft every year.The market for new aircraft collapsed in the 1980.

There were several changes in the ownership of Henschel Flugzeugwerke. In 1983 MBB, the owner of the Piper Business Division placed it up for sale. Wilfried Otto bought the business through a Management/Employee Buy Out together with former employees and Piper Dealers. Since then the company has grown by providing first class service to customers. In 1985 the company built its own facilities at Kassel Airport. The company went public in 1986 and has been listed on the stock exchange since then. In 1998 the company constructed a second building for aircraft maintenance and service.

After the stakeholders of Kassel Airport signed a memorandum of understanding to upgrade the airport, Piper Germany purchased 14,500 sqm land right next to the tower at the new airport and constructed a state of the art building of 3,600 sqm in size for aircraft sales, aircraft parts supply, aircraft maintenance and service under one roof. In Spring 2013 the new airport was opened. Piper Germany relocated to the new airport  in summer 2013 and continued the tradition of owning the land and buildings. Kassel is located in the heart of Germany and is one of the fastest growing economic regions in the centre of Europe.

Piper Germany is an authorised dealer for Piper Aircraft for Germany, Austria, Switzerland, England and Ireland. Piper Germany is also the exclusive Piper Dealer for France together with a French partner as a Joint Venture.

Trading with aircraft requires a high standard of professional expertise. This is guaranteed by Piper Germany through decades of experience in selling and brokering new and used aircraft. Piper Germany understands the demands of the industry and the requirements of the customers, whether aeroclubs, private individuals or companies who place individual demands on its aircraft, its use and on financing.

Over the years Piper Germany have established a service network in all countries it represents enabling the company to provide reliable “on site” service.

With over 40 years experience in General Aviation Piper + Jet Maintenance offer customers after-sales service and support of the highest industry standards. With direct access to the large and diverse on-site parts stock and excellent network for all major suppliers of aircraft parts and accessories, minimum AOG time is guaranteed. Aircraft owners and operators of Piper Meridians, Pilatus PC12s, etc. across Europe value the expertise of the engineering team. Piper + Jet Maintenance have fully licensed, highly skilled engineers for work on aircraft avionics, both glass and analogue. The Avionics team is experienced in the service and repair of complex avionic components and systems. Furthermore the company is an authorised dealer for Garmin, Honeywell and Aspen.

With a high level of know-how and expertise Piper Germany remains unchallenged in aircraft parts supply in the domestic market and is one of the leading suppliers in Europe.

With thanks to GA Buyer Europe Magazine – http://www.avbuyer.com/articles/ga-products-services-news