The Flying Reporter to Cover AeroExpo 2022 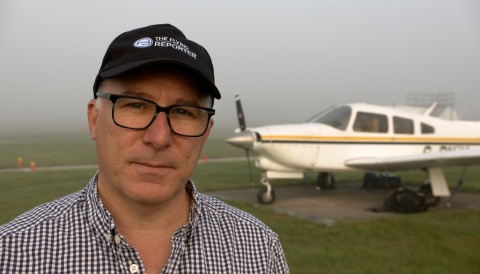 Jon is well known in the GA community for his YouTube channel ‘The Flying Reporter’, which follows his adventures as a private pilot and aircraft owner.

A special episode of The Flying Reporter will be made from this year’s show and Jon will be interviewing exhibitors and special guests for use on the AeroExpo website (www.aeroexpo.co.uk).

“I’m thrilled to be a part of AeroExpo this year and look forward to getting to know the businesses, organisations and guests who are attending,” said Jon. “I’m planning to fly-in to the event in my 1977 Arrow III Turbo, and will be roving the show with my camera to capture the best elements for the AeroExpo website and my popular YouTube channel.”

Jon worked at the BBC for more than 30 years, starting his career as a local radio presenter, before migrating to regional TV news. He was an award-winning reporter and correspondent, and worked for a spell as a producer/director on the BBC’s Watchdog and Rogue Traders programmes.

Highlights of his career include coverage of three missions of the NASA Space Shuttle and investigative reports into malpractice and organised crime.

Jon left the BBC in May last year (2021) and now runs his own corporate video business, Flying Reporter Productions.

Learning to fly in 2013, Jon started filming his flights and used his creative flair to produce ‘warts and all’ videos — entertaining and educational YouTube episodes which have followed him on his travels across the UK and Europe. You can find his channel via a simple internet search for ‘The Flying Reporter’.

“I’m far from an internet sensation,” said Jon, “but I have a very loyal following, who appreciate the fact that I keep it real. My films share my successes and failures, as well as the ups and downs of aircraft ownership and GA flying.”

John Hamshare, AeroExpo Event Manager for AvBuyer Events, commented: “We are delighted to have Jon covering our event and providing content that will highlight our exciting new venue, Cotswold Airport, and our wide range of exhibitors and visiting aircraft.”